In a landmark ruling, two chimpanzees, imprisoned and abused for research, were temporarily granted legal ‘personhood’ status for the first time. The Nonhuman Rights Project launched a lawsuit against Stony Brook University in New York requesting the transfer of two research chimps, Hercules and Leo, to the Save the Chimps Florida animal sanctuary in Florida.

The activists are focused on securing the freedom of the two chimps, but their case has massive implications for exploited animals everywhere – it could potentially pave the way for other animals to gain legal status. 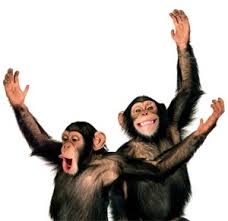 The Nonhuman Rights Project campaigns for primates to be granted human rights because of their intelligence and complex emotional and social lives. The activists’ mission statement demonstrates a commitment to the attainment of legal rights for some nonhuman species, which would liberate them from cruel, human exploitation, such as animal testing and circus performances.

Our mission is to change the common law status of at least some nonhuman animals from mere “things,” which lack the capacity to possess any legal right, to “persons,” who possess such fundamental rights as bodily integrity and bodily liberty, and those other legal rights to which evolving standards of morality, scientific discovery, and human experience entitle them.

To be clear, the judge has not yet definitively declared the chimpanzees to have legal rights, as she later amended the order to strike the words ‘writ of habeas corpus,‘ as this would imply they are legal persons. The Nonhuman Rights Project do, however, remain positive, as this is a good opportunity to argue their case for basic human rights to be conferred on apes.

These are not the first primates to come close to gaining enough legal rights to free them from exploitation. The Great Ape Project sought to order the release of Jimmy from a zoo near Rio de Janeiro, but was unsuccessful.

The Great Ape Project was founded in 1993 and includes amongst its ranks Jane Goodall, Peter Singer and Richard Dawkins. It advocates that the great apes (chimpanzees, gorillas, bonobos and orangutans) should be granted a UN declaration protecting their right to life, their individual liberty, and prohibiting torture.

You can support the great apes’ right to liberty, life and the freedom from torture, by signing the petition for a world declaration on great apes rights here.

Hello! I'm Clarissa, a green lifestyle blogger from Norwich, UK. I write about environmental concerns, animal rights issues, and also my hobbies of birding, gardening, and nature rambling, as well as sharing vegetarian recipes and reviews on cruelty-free products. Feel free to comment and connect with me on social media; you can find me on: Instagram: https://www.instagram.com/this_veggie_life/ Twitter: https://twitter.com/ThisVeggieLife View all posts by clarission